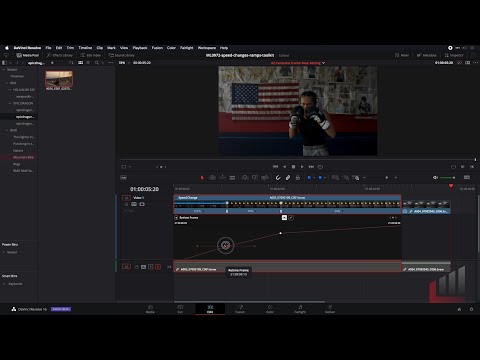 Do you have a moment that you wished you had captured in ‘slow motion mode’ in your camera, but didn’t? Or did you capture video at a high frame-rate but can't figure out how to make it play back in slow motion?

If that’s you and you want to figure out how (or IF) you can do it in DaVinci Resolve after-the-fact then you're at the right place! DaVinci Resolve offers several methods for achieving the ‘slow motion effect’. Which method you choose will depend on if you want a ‘variable speed effect’ (or not), if the quality of the effect meets your approval, and if you have the paid version of DaVinci Resolve (named DaVince Resolve Studio) or not.

The ‘slow motion’ workflows in DaVinci Resolve (from simplest to most advanced) are:

Method 2: Using the ‘Fit to Fill’ command to set a constant frame rate speed effect (on the Edit Page)

Did your record your shot at ‘normal‘ speed but now want to slow it down in the timeline? This is the most basic form of the slow-motion effect, where you set a single frame rate for the length of the shot. This workflow is for setting a constant speed slow motion in the Cut page.

Either right-click on the clip or use the ‘Clip’ pull-down menu and then choose: ‘Change Clip Speed’.

For more control over your slow-motion effect, switch to the Edit Page.The Edit Page provides several advanced controls not found on the Cut page, for more refined choices.

Do you want a ‘slow-motion ramp’ effect, where the clip plays normally and then smoothly slows down (and maybe speeds back up again? Then you’re looking for DaVinci Resolve’s ‘retime’ controls.

To activate ‘retime’ select the clip in your timeline and choose ‘retime’ from the right-click menu or from the ‘Clip’ menu. Using the controls on the clip itself in the timeline:

Other Tutorials You May Find Interesting

If you want to master DaVinci Resolve's Color Page then you need to master its Cloud and Point trackers. This Insight sets you on that path.

Learn DaVinci Resolve's Stabilizer and its legacy 'Classic Stabilizer'. This Insight is pulled from our Courses with a new introduction.

The Fundamentals of DaVinci Resolve's Gallery and Memories

Learn how to use Resolve's Gallery for comparing and sharing color corrections or nodes between different shots.

How do you color correct Picture-In-Picture effects in DaVinci Resolve, when all you have is a single rendered movie of the entire timeline?

Learn an innovative approach to framing filmed images for multiple aspect ratios. Also - how to view these framings inside DaVinci Resolve.

Frame.io provides a ton of tools for collaboration including some great ways for a colorist to interact with their client. Learn more...