Two monitors may not match even if calibrated to the exact same color and luminance values. Learn how to perceptually match two monitors

A Calibrated Approach To Monitor Matching

For me, one of life’s greatest pleasures if knowing that the monitor you’re grading on is perfectly calibrated and that the images you’re looking at are indeed what the images actually look like.

Yes, I know it’s kind of sad that makes me so happy, but obviously to get the most out of a shot you must know exactly what’s the truth and what’s not – that of course, is the goal of video monitor calibration.

Like many of you, in my suite and in the rooms in my facility, we have multiple monitors – reference monitors for the operator and larger, more consumer oriented monitors for clients.

I’m sure you’ve heard this one before:

‘Which monitor is correct?’  or ‘What monitor should I look at?’

These vexing questions and many more like them, are something every colorist or editor has heard before and has to deal with all the time.

You’d think that the issue is simply a matter of proper calibration on each monitor – unfortunately, that’s not always the case.

Many times, the underlying cause of monitors not matching has nothing to do with proper calibration but rather different display technologies and how the human visual system interprets the different spectral distributions of those technologies.

OLED displays in particular, have brought the issue of metamerism (discussed below) to the forefront and have many very smart people thinking about perceptual color matching issues.

If you’ve explored calibration, you might have heard of CMFs (color matching functions) like the Judd modification which has been validated by many color scientists and many studies and is starting to be used more and more.

While CMFs like Judd can tackle many perceptual matching issues if you’re not a color scientist, the math, the explanations, and the practical ‘how to’ information can seem a little overwhelming.

Fortunately, there is a pretty straight forward way to perceptually match two monitors and that’s what I want to explore in this Insight.

You’ve invested in a quality probe, pattern generator, as well as Lightspace, or Calman for calibration software and you’ve set off calibrating your monitors.

You start with your ‘hero’ or reference monitor and are thrilled with the results.

Next, you move to your client display and like your reference monitor, by the numbers, get that well calibrated.

You then put a well-known project up on screen and to your horror after hours of profiling and calibration work the displays don’t match at all!

Color checker tools in Calman or Lightspace report near perfect results on each display, with Delta e values so low that any inaccuracy is supposed to be imperceptible!

Even though the numbers are saying everything is correct, clearly when you look at the displays they don’t look the same.

To make matters worse – sometimes the two monitors look pretty close on some material, and other times they look really far off.

Put simply, metamerism failure is a phenomenon that even when two colors are measured to identical values with a calibrated instrument, they still look different.

This happens because of different spectral power distributions (SPDs) between display devices.

OLED, Plasma, CRT and different types of LCD all have different SPDs that effect perception and those differences are most noticeable with the white point of the display and on grayscale images.

Mixing Light friend and head of Flanders Scientific Bram Desmet explains metamerism failure quite well in the video below (note: the video is a little long): 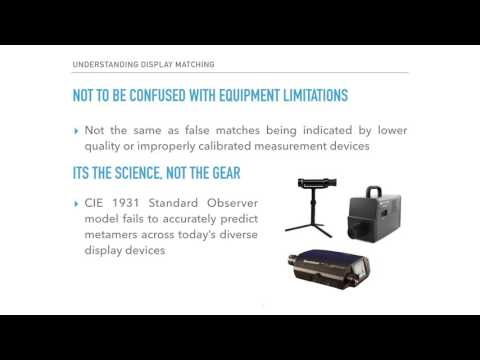 To reiterate one thing Bram said in the above video – our eyes are great relative devices, not absolute devices.

If you’re able to have one monitor in a room – DO IT!

So, what do you do about metamerism failure if you need two monitors in a room?

Well, the first stop for many is to adjust the non-matching display i.e. the client display using the built-in controls of that monitor.

The Problem With the DIY Approach

Without the help of more sophisticated tools, you’ll be forced to use the display’s controls to tweak the output. This approach has several problems:

While utilizing the onboard controls for a display can get you close, in my opinion those controls are ultimately frustrating and you’ll probably notice issues and want to tweak every time you turn on the display!

Therefore, a slightly modified approach to a traditional monitor calibration using a LUT is the best way to ensure a perceptual match.